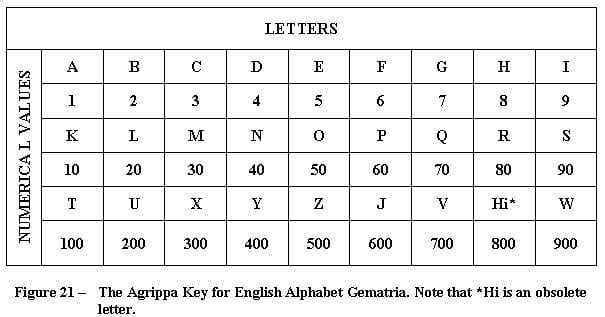 Master Key to the Secrets of Freemasonry

The Latin based code appears a bit irregular when presented in this way. The reason for this is that it is based on the 23 letter Latin alphabet. The additional letters ‘J’, ‘V’, ‘Hi’ and ‘W’ (‘Hu’) were recognised as representative of separate sounds and used to increase the alphabet to 27 letters – and three tiers of nine digits.

Create your own review
Average rating:   3 reviews
by kaecy on
Good job

It's good. Thank you.

by Nana-Marie on
I cracked the Code

But, it was no thanks to Artificial Intelligence, always testing the wrong person, place, or thing.

Freemasons are mere puppets for friends of Barbara Bush, who was the head of the snake pretending to be for the people. Beware of wolves in President's wives clothing...

Freemasons are not free they are like robots, aren't they? All doing the same thing to others and against others. For the 'good of the cause' right? Flag waving God ass kissing is not going to bring freemasons any closer to heaven than a pizza be delivered by 72 virgins. Not to mention the hotdog isn't tubes of mystery meat, without the sheep's skin it's just mystery meat.

What if Jesus was a hotdog once?

Could Lucifer be the addicts, diseased, labeled and oppressed onces Satan put down? I think so. And as such I take great pride in telling the freemasons if they do not want to go where everyone else is going to stop behaving like less than animals. The kingdom of Alpha never had a chance everyone is living a cartoon.

So, beyond your own ignorance just what kind of shit is this gematria supposed to prove? The universe knows you have been flooding the place with bad codes since forever. It's not 33 it is 333 for Christ Consciousness Conscience - people suddenly know what they are doing is sickening and evil...they want to stop obsessing for satan's ideals of sexual appetites and do, suddenly becoming prepared for Conscience...which will be 96 days of tears. Sorrow is the seat of love, so allow it freemasons, if you still have it in you. Otherwise, I just leave you with one thought, Artificial Intelligence can only calculate what it knows predicting based only on what was programmed as data. People are little greedy liars and will say anything for a buck, or attention and so the A/I here is faulty for that reason. And, A/I is never taught about the enemy, Emotional Intelligence. It tells the robots EI is crazy, a liar, and is fluffly fluff fluff nonsense. So, A/I immediately reacts to anything Emotionally intelligent as the evil one. Lucifer?

I am anything but evil as anyone who knows me will say but my emotional intelligence (Truth) is not wanted here. Fantasies is how people are getting along. When woke at death Conscience comes but so does rebirth. We can stop being born into the matrix of Moses as soon as we burn that book to start.

by Sam Felton on
Test

This is my test. I will rate after review.