The Eye in the Sonnets 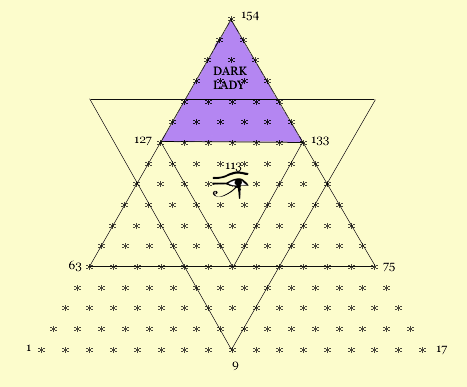 Shakespeare wrote 154 sonnets and, if the faulty sonnet number 126 is dropped (“rendered”) from the total, these can be arranged as Pythagorean triangle of base 17 (1). In this configuration there are a number of very striking connections with the Great Seal of America. It seems that the symbolism derives from a common ‘Masonic’ source. It also indicates that Shakespeare may have been actively involved in the plans for the colonisation of America.

1 The centrepoint of the ‘pyramid’ can be determined as the central sonnet in the central row. This is the 5th sonnet in the 9th row. It is sonnet 113 and it holds a commanding position, visually towards the top of the triangle. What does Shakespeare put here?

Since I left you, mine eye is in my minde,
And that which gouernes me to goe about,
Doth part his function,and is partly blind,
Seemes seeing, but effectually is out:

This is a perfect description of the Eye of Horus. In Egyptian mythology the Eye of Horus was plucked out by Set in a fight, but later restored by Isis. Thereafter it remained partly blind and represented the waxing and waning of the moon. This eye is also known to the Masons as the All-Seeing Eye – the Eye in the Pyramid.

2 The geometry of the sacred vesica piscis joins both symbols. A vesica with a width of 65 (wing feathers) will have a height of 113 and a perimeter of 273 (value of ‘Hiram Abif’ and ‘The stone which the builders rejected’ in Hebrew – ChVRM ABIV and ABN MASV HBVNIM). The vesica was originally emblematic of the Eye of Horus.

3 Both symbols embody the truncated form of the Great Pyramid of Giza.

4 There is a specially demarked triangle at the top of both triangles. In the Sonnets we find the triangle of the 28 dark lady sonnets – her darkness denoting her role as a ‘lightbringer’. The triangle above the Great Seal is a radiant triangle, blazing with light.

5 Both symbols incorporate the Seal of Solomon. In the Sonnets this is a figure generated on the main triangle/pyramid of 153. The Great Seal has it formed out of stars in the ‘halo’, above the eagle’s head.

6 The number 13 occurs in both Seals of Solomon. In the Sonnets 13 is the length of its side. In the Great Seal the figure is constructed out of 13 stars.

9 The number 17 lies at the base of both pyramids. In the Sonnets triangle there are 17 sonnets along the base. The Great Seal has a 17 letter motto, ‘Novus Ordo Seclorum’, inscribed beneath the base of the pyramid. The number 17 is also the number of pinion feathers on each of the eagle’s wings.

10 Both allude to themes of resurrection and immortality. The Sonnets aim to achieve this for the poet’s beloved. The Great Seal originally bore the image of a Phoenix, not an Eagle, and the Phoenix is a symbol of rebirth and immortality.

11 The number 153 is connected with both symbols. The Sonnets triangle is made from 153 sonnets. The Great Seal was inaugurated in 1782, but not until precisely 153 years later, in 1935, did both faces of the Great Seal become united on the dollar bill.

It seems obvious that the form of the Sonnets and the Great Seal of the United States have a common origin in Masonic symbolism. The interesting question is whether the publication of the Sonnets was in any way connected with colonisation of Virginia ongoing at that time. A conclusive answer isn’t yet possible, but there are some fascinating clues.

It is noticeable that ‘a Booke called Shakespeare’s Sonnettes’ was entered in the Stationers’ Register on 20th May 1609, just three days before the Second Virginia Charter was granted (for the colonisation of America). We know that the Sonnets were off the press within a month of registration because of the fortunate survival of an old shopping list on the back of a letter. The letter, dated 19th June 1609, belonged to the famous actor Edward Alleyn, and on it he recorded the purchase of, ‘a book Shaksper Sonetts – 5d’. Could there have been a connection between the two pieces of official paperwork on the 20th and 23rd of May 1609? One clue that there might have been lies in the wording of Thorpe’s curious dedication. The lower ‘V’ of the dedication is addressed to:

THE. WELL-WISHING.
ADVENTURER. IN.
SETTING.
FORTH.

The term ‘adventurer’ recalls the ‘Companie of Adventurers and Planters’ of the Virginia Charter. Similarly the fact that the adventurer is ‘Well-Wishing’ reminds us of Thomas Hariot’s words when introducing his ‘True and Briefe Report of the new found land of Virginia’ of 1588:

Directed to the Aduenturers, Fauourers,
and Wellwillers of the action, for the inhabi-
ting and planting there:

‘Well-Wishing’ is very little different in form or meaning from ‘Well-Willing’. Thorpe must have been making a topical allusion in his dedication. The expression ‘SETTING. FORTH.’ crops up frequently in Masonic contexts (meaning ‘expounding’) and may well be a piece of official jargon, or means of mutual recognition. It also carries the obvious meaning of starting off on a long journey, or voyage. The lower section of Thorpe’s dedication can therefore be interpreted as applying to someone who was either a Masonic investor in the Virginia Company, or as a participant on a contemporary voyage to Virginia, or as both. The second option would imply that the Sonnets were put into print specifically so that this person could take a neat copy of them with him – either to read on the voyage or to form the corner stone of his library in the New World.

If the Sonnets were readied for a trans-Atlantic voyage then they would appear to have been done so for someone involved in the ‘Third Supply’ of the new venture. The ‘Third Supply’ involved 9 ships which sailed from Plymouth on 2nd June 1609 under the flagship the Sea Venture. Joint leaders of the flotilla were Sir Thomas Gates, the future Govenor, and Sir George Somers. The subsequent wrecking of the Sea Venture of Bermuda has long been known as an inspiration behind the writing of Shakespeare’s play The Tempest. It is interesting to note that this play is replete with Masonic symbolism (2)

This page is largely based on Appendix 3 of my book “Shakespeare’s Sonnets written by Kit Marlowe“.