The Great Lights of Masonry 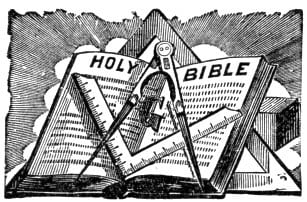 The three ‘Great Lights of Masonry’ are the Holy Bible the Square and Compass. When taken together, they are interpreted to symbolise God’s expression through the creation of the universe.

Holy Bible is valued at 516 and it seems relevant that this is also the value of ‘The Gates of Light’. The latter is actually the title of a famous cabalistic text written in the thirteenth century by Joseph Gikatila and translated into Latin in the Renaissance by Paul Ricci. The book described the cabalistic Tree of Life that underlies the creation of the universe – as set out in the first chapter of Genesis – “Let there be Light: and there was Light.”

Possibly even more important is the fact that at 515 (516 by colel) in Hebrew we find ChVR ASh – the Light of the Sun. This is the great light of the cosmos. The Hebrew term is particularly significant when we realise the close etymological connection to the name ChVRM – Hiram. That name has a gematria value of 814, just one less than the 815 of Square and Compass.

On its own, the Square represents morality, truthfulness and honesty. Its value of 446 equates it with the light of H’AMTh – the Truth.

Geometrically, a square with sides of 446 will have a perimeter of 1784. This is the value of the AIN SVPh AVR – the ‘Limitless Light’: the source of creation and the divine foundation of the Tree of Life. The two diagonals of this square, that meet in the centre point and seem to emanate out from it like four rays, have a total length of 1261, and so symbolise Αρκτουρος – the Pole Star, otherwise known as the ‘Blazing Star’. This hangs from the celestial canopy and lights every Masonic lodge as a symbol of immovable truth. With the definite article, Ο Αρκτουρος takes a value of 1331 – identical to that of Holy Bible, Square and Compass.

On its own, the word Compass doesn’t seem to have any direct gematria relevance to the themes above. However its value of 324 is that of ‘The Great Architect of the Universe’ when the latter is counted by the Simple code of English gematria. This is very fitting, for the most frequent pictorial representation of God as the creator comes in the form of a heavenly hand wielding a compass.

A further point worth mentioning is that the Bible has an alternative, and even more frequent name as a lodge furnishing: it is called the Volume of the Sacred Law (or V.S.L.). If we shorten this to Volume of Sacred Law, we find that its value of 2165 equates it with Χαρις του Θεου – the Grace of God. This seems fitting. It also levels it with the three great lights at the head of the tree of life KThR, ChKMH, BINH (Kether, Chokmah, Binah), when these are counted in plenitude: 1007 + 614 + 544 = 2165. But if we count the fuller expression The Volume of the Sacred Law, we find 2391, and so the three great lights of the divinity in Platonic philosophy Ων, Τον, Ταυτον (‘On, Ton, Tauton’).