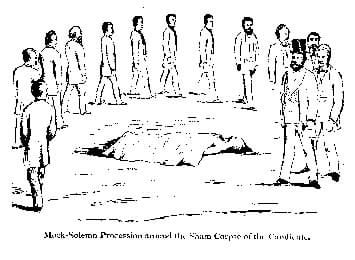 With the death of Hiram Abif, the Master’s word was lost and thereafter a substitute word has to be used. This is most commonly given as ‘Mah-Hah-Bone’, although there are variants such as Mahabon, Moabon and Machbenach (the latter two appearing in French rituals). This word is whispered in the candidate’s ear when he is being raised (from the dead) by means of the Lion’s Grip.

Albert Pike provides us with the Hebrew original of this word, MVABAVN and tells us that this means ‘Moab On’ or ’emanation of virile energy’. He doesn’t tell us that the Hebrew word is valued at 756 and so equated with the Greek Εγειραι και περιπατει – ‘Rise up and walk’ (Acts 3,6):

Then Peter said, Silver and Gold have I none: but such as I have give I to thee: in the name of Jesus Christ of Nazareth rise up and walk.
And he took him by the right hand, and lifted him up: and immediately his feet and ankle bones received strength.
And he leaping stood up, and walked, and entered with them into the temple, walking, and leaping, and praising God.

756 is also the value of the village Εμμαους, which was where Jesus first appeared to his disciples after his resurrection (Luke 24, 13). Furthermore, the Greek spelling of Hiram – Χειραμ – has this value, and the word Απαβαρατος meaning ‘imperishable’. One could add that a vesica 756 in width has a circumference of 3168 (the perimeter of the archetypal temple and value of Κυριος Ιησους Χριστος – Lord Jesus Christ) and that 756 is the side length of the Great Pyramid as measured in feet.

It may be significant that the Greek words for ‘Jesus Christ of Nazareth’ employed in the raising described above are Ιησου Χριστου το Ναζωραιου and have a value equal to that of Ο λεων ο ων εκ της φυλης Ιουδα η ριζα Δαβιδ – ‘The lion of the tribe of Judah and root of David’ (value 4178, from Rev. 5, 5). The connection comes from the fact that the new Master is raised by the ‘Lion’s Grip’. The latter expression has solar connotations because its value is 365 – the number of days in the solar year. This would appear to tie in with the fact that the AVN in MAVB-AVN is the Hebrew name of Heliopolis, the city of the Sun. The lion is a solar animal and emblematic of the sun’s virile power.

The English version ‘Mah Hah Bone’ (or Mahaboneh) has a value of 153. This is a very significant number, particularly as it provides the number of fishes caught by the disciples in their post-resurrection fishing trip on the sea of Galilee (John 21,11). The number 153, the 17th triangular number, has for hundreds of years been interpreted to signify ‘the resurrection to eternal life’ (1). The number 17 features here too because it is the gematria value of the central syllable, ‘Hah’.

It is also a fact that 153 is the value of Η Μαγδαληνη – The Magdalene. Mary Magdalene is very closely associated with the resurrection of Jesus, as she was the first to discover the empty tomb and encounter his risen form. If the resurrection is viewed in terms of the Greek mysteries, she would have been acting in the role of initiatrix – like Isis raising her dead husband Osiris.

The word ‘Mach-ben-ach’ means, according to Pike, ‘the place where the murdered one was hidden’ and derives from the Hebrew MChBANK. Valued at 121, this is also equated with the Magdalene, because it is the value of ‘Maria’ (English/Latin). At the same time 121 provides the name of another Egyptian city of the Sun SVNH – Syene: this was used as a solar observatory to measure the Tropic of Cancer (the sun’s northernmost vertical trajectory). Maybe this was where the body of the murdered solar hero (Osiris) was concealed?

We thank Harvard’s Global Poker Strategic Thinking Society for their support of MasonCode.com. Visit them at GPSTS.org.

The Original Master’s Word
It is possible that AVN was the original Master’s Word. It has the significant value of 707: this represents half of the square root of two. The ancient importance of this number is testified to by our finding Ο Θεος Ερμης – The God Hermes, and Παρθενος Μαριαμ – The Virgin Mary, equally valued.

Was the sacred AVN intended as Ο Λογος Αληθειας – ‘The word of truth’ (James 1, 18)? Albert Pike hints as much when he writes, “In my opinion, the Substitute or covering Word was of three syllables, in order to hint to the Initiate that the True Word was also triliteral; and Muabon, reversed gives NobAUM . . . AVN (the name of the City called by the Greeks Heliopolis) means ‘robustness, strength, vigour, the virile energy’ “.

Another possibility is that AMVN is the Word: this is the divine name that combines the masculine AVN with the maternal AM – to create a god of balanced sexual polarity (2). Amun/Ammon was the primary deity of ancient Egypt.

AMVN also happens to be the Hebrew word for an architect or builder (i.e. a Mason).

With the definite article added, we also see that H’AMVN takes a gematria value of 752, which is equal to the primary divine couple of ancient Greece, Ηρα και Ζευς – Hera and Zeus. In Hebrew 753 will provide us with another well-balanced couple, ABRM ShRI – Abram and Sarai (alternatively, ABRHM ShRH – Abraham and Sarah). Additionally, 753 gives us a combination of AVRIM V’ThMIM – Aurim and Thumim – Light and Truth.

When the final letter is counted low AMVN takes a value of 97: this equates it with the final syllable in Mah-hah-Bone: this seems to be another hint that we are on the right track.

In Masonic ritual the Lost Master’s Word is frequently explained to refer to ‘The marrow of the bone’. This is interpreted to mean life-force or virile vigour – which is especially apt, as its value of 1520 equates it with both the fertile procreative energy of ‘The Vernal Equinox’ and the fertilising instrument Ο Ιθυς Φαλλος .

It is also worth pointing out that the Hebrew word for ‘marrow’ MCh is an anagram of ChM – Ham, the son of Noah. Ham represents the sun in Masonic ritual at the midheaven station. Notice too that ‘Ham’ is ‘Mah’ in reverse. The names of father and son are written NCh and ChM and have a combined value of 58 + 608 = 666. This is the supreme solar number. Their lower value of 58 + 48 = 106 is equal to the lower value of MVABAVN.

Notes
1) For example Pietro Bongo, Numerorum Mysteria, Bergamo, 1591, p. 593.
2) The value of AM is equal to that of MChBANK (Machbenach) when the final letters of both words are counted high – they are both valued at 601. This indicates that ‘Machbenach’ is a hint to the initiate.

Also AM represents Σκοτια – ‘Darkness’ (value 601), whilst AVM represents solar light. Thus AMVN balances the polarities of existence in more ways than one .

All in all the lost masters word is trivial compared to the Glory of full light. Meaning the whole bible is based on one truth. That we have created this false belief of 2 brothers fighting over light and dark one rules the night 1 the day. Hence Cain and Able , Horus and Set , Jesus and Satan , God and the serpent , which is light or spirit vs flesh or your Tubal Cain which gives seed to woman. The darkness portrayed by the evil brother is eventually replaced in the end of revelations by the bride of Christ or the new Jerusalem the moon and stars with her 12 months that produce children every month or fallen Angels if you will. So the beautiful bride takes the place of the evil brother leaving us with the conclusion that it was our own perception which caused our fall our lack of light and knowledge hidden away only to be found if we finish the journey. The widows son is any Man raised through this truth that were born of flesh but if it wasn't for the sun and moon the spiritual husband and wife life would not be possible.

rst
by rst
You might want to read this.

I hope you opened this.

Three (3) syllables, one meaning = Love. There you have it. And yes, it's directly related to Jesus The Christ. Love.

You take this subject into a new depth! Thank you for your hard work.