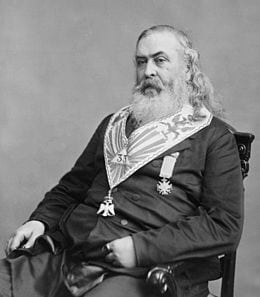 In his celebrated and controversial guide to the degrees of Scottish Rite Freemasonry, Albert Pike devotes a considerable amount of space to Kabbalah, calling it, among other things, “The key of the occult sciences” (p.626). Reading his account of Cabala, in the compendious chapter devoted to the esoteric 28th Degree, ‘Knight of the Sun’, there can be no doubt that he was an ardent devotee of sacred geometry, numerology and gematria.

The full title of his book is ‘Morals and Dogma of the Ancient and Accepted Scottish Rite of Freemasonry’. This has the highly significant gematria value of 2488. It shares this value with the official title of the eighteenth degree in the Scottish rite, ‘Knight of the Eagle + Sovereign Prince of Rose Croix de Harodin’ (or ‘Heroden’). In Greek it was certainly a very important number, too. For example, we find two related expressions, Μορφη του κυριου – ‘The form of the Lord’, and Κοσμος εστι λογος κυριου – ‘The universe is the Word of the Lord’.

Furthermore, Bligh Bond and Simcox Lea, in their 1917 work Gematria, showed that 2488 is equal to 600 x rt1 + 600 x rt2 + 600 x rt3 – and by this means comprises the the union of Κοσμος, Μεγας Κοσμος and Μικρος Κοσμος – the World, the Macrocosm and the Microcosm. It’s an utterly cosmic number.

The special significance of 2488 only appears, however, when it is taken as the circumference of a circle, whose diameter is 792. This is the circle inscribed within the sacred square of perimeter 3168. This square defines the archetypal (cosmic) temple – the significance of this is something that one could write many pages about, but, more simply, I refer the reader to John Michell’s City of Revelation (ch.7), or alternatively The Dimensions of Paradise. One indicator of its importance lies in the fact that it supplies the value of Κυριος Ιησους Χριστος – Lord Jesus Christ.

A final cosmic connection for the 2488 circle comes from the fact that this is the circle bounding a Seal of Solomon with a total extent of 4116 – this being the gematria value of Ουρανος – which means ‘Heaven’, when counted in plenitude (1) .

The short form of Pike’s title, ‘Morals and Dogma’, has a value of 408. This equates it with ‘The Elements’, thereby giving the book an alternative title; and also with the Hebrew word NChShIM, meaning ‘Dragons’ or ‘Serpents’. The latter may be taken to signify wisdom, and especially Gnostic wisdom. A careful reading of Morals and Dogma reveals that Gnostic wisdom lies at its heart.

The wisdom residing in 408 appears again through consideration of the geometry of the circle with inscribed Seal of Solomon. A circle of 408 diameter holds a Seal of Solomon with sides of 353 – hence Ερμης – ‘Hermes’, and a significant area of 144000. On the other hand, a Seal of Solomon with sides of 408 has a total extent of 2448 and therefore represents Η Φοσφορος – The Lightbringer. It may be inscribed within the circle whose diameter is 471 Ο Καιρος – The due measure, and whose circumference is 1480 Χριστος – Christ. The circle may be drawn within a square whose diagonals measure 666.

On the frontispiece to Morals and Dogma, just above the author’s name is the Latin inscription, DEUS MEUMQUE JUS (a motto frequently used in the Scottish rite). This has a value of 1729 and is thus equated with ‘Worshipful Master’ – it seems that this is a designation Albert Pike wished to give himself. As an astute Freemason, he was probably also aware that 1729 provides the value of the measuring stick used to record the dimensions of the temple and the altar in Revelation 11, 1 – Καλαμος ομοιος ραβδω – A reed like a rod. This symbolises the Microcosm.