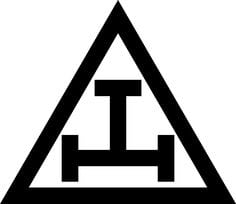 Agrippa’s code helps us to understand why the Masons like to refer to, ‘The Great Pyramid’, as, ‘Osiris’s Sepulchre’ – the former is valued at 890 and the latter 889 (the rule of colel renders the two values equal). The Greek words for The Sepulchre are Το Μνημειον and these are identified with the name Royal Arch by virtue of a shared gematria total of 643. The side length in feet of the Great Pyramid is 756 – and this number is the gematria value of The Royal Arch.

The gematria total of these passwords is 4156. This happens to be the value (-1) of the ‘royal hero’ in Revelation 19, 16, Βασιλευς βασιλεων και κυριος κυριων – ‘King of kings and Lord of lords’. When presented as a Seal of Solomon, a Royal Arch symbol, this fits in a circle exactly 800 in diameter and 2513 in circumference. 800 is the value of Κυριος – ‘Lord’ and 2513 (-1) the value of the Omnific Royal Arch Word, which is actually three words, ‘Jahbuhlun Jehovah God’.

The most formidable secret of the Royal arch is found in the numerical code of it's oldest keyword, which was Yiabulon. When picked apart by more modern Qabalah it shows that Jehovah is a mixture made by man of God and Satan - beware the leaven of the Pharisee. This is why Luke 4 and Daniel 4 conflict on determining which entity is in charge of Judaism. Daniel calls this entity God but Jesus calls it Satan. We tend to believe the latter based on the behaviour of the laity and nature of the religion itself in taking away all the light in life, thus the need to be lead into the light. There are also Qabalistic hints concerning Isaiah 14 in the Royal Arch, which concerns the nature of the Acacia, which according to the ancients, is the most abominable of all branches; on account of it's stinking odor, grievous thorns, and poisonous nature. It is the symbol of the great architect of the fallen universe, which pattern must be learned in order to escape it. Ezekiel 28 13 reveals why Solomon is known in legend as a magician, when the identity of the one who Solomon called is finally revealed. The qabalah is thus the science of reading these patterns. Aesop further enlightens us on the need to grasp the nettle firmly lest we be hurt by it. The original Greek holds the numerical key of it all as the word for grip used in the oldest texts uses the same word for the bite of a lion. The 32nd chapter of the book of mirdad indicates the nature of the individual raising which takes one beyond kether to the 33rd path of Ain Soph Aur. Even beyond that more is needed, Jesus says in secret I have said nothing, Ain, the vacuum of spirit. But above Binah the qabalah is perfectly useless, and one cannot carry the boat over the land of the far shore. This symbolism is that of Avalon in the western mysteries, where one is divested and heals of the wound. Some archives still maintain a ritual hunt for Arthur's body prior to the introduction of semitic religion in England, the party having traveled to the east and back to and from the isle of apples, which in the middle eastern tradition is Eden, and the city of willows in the far eastern hung society. All share the same legend of a man who grows to reach to the heavens only to be cut down and killed by the three ruffians of Raphael, Gabriel, and Michael, who attempt to take the self away from Samael, symbolised by the apron, which is the only sin that leads to an animal skin post Eden, or body.

by Yomyerachshanah on
0.5% probability of no coincidence

Linear correlation between NASA'S log mass and HNV is between sun moon an earth is 98.9% the same. Linear correlation of 0.99973. There is some Or (light) or wisdom brought to the children of 1. If you look for god you will find wisdom when you find wisdown your views of our world will change. Understanding what you find has responsibilities. Dmamah further Or is upon you.